Sarah Banducci earned her Ph.D. in Cognitive Neuroscience from the University of Illinois at Urbana-Champaign in 2017. She left academia to work in industry and is currently working as a regulatory project manager for a large medical device company in the San Francisco Bay Area. Sarah’s science outreach efforts are currently directed through the Bay Area Chapter of the Society for Neuroscience, formerly with the Science Policy Committee of the Triangle Chapter of the same organization.

Ryan Bell earned his Ph.D. in Cognitive Neuroscience from the City University of New York in 2015. His work at Duke University School of Medicine is primarily focused on the neuroscience of drug use and HIV status.  As chair of the Triangle Chapter of the Society for Neuroscience’s Science Policy Committee, he has extensive experience meeting with local, state, and federal legislators about the importance of neuroscience research and funding. Ryan is also a co-chair of the Durham County, NC opioid task force data committee whose mission is helping to reduce opioid overdoses in Durham County. 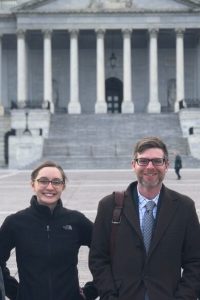